*Please note- this blog post was written during my time at Brain Fit Academy Inc. I have since continued this amazing work under my own company- Brain FUNdamentals LLC. I hope you enjoy!

“I’m soooo tired!”. We hear this all the time at Brain Fit. Clients come for a session and they are just so darn tired. It happened with my own son (I remember) when he was also going through the program.

In the post “There’s Not Much Left“, I talked about the stress response- the fight/flight/freeze response and how it can take a toll on people- kids through adults. When the brain is in a constant state of stress, the brain power needed is tremendous. When the brain/body are in “survival” mode, it’s hard to access thoughts, or have energy to do much.

Take the ATNR reflex for example. The ATNR (Asymmetrical Tonic Neck Reflex) is the reflex that serves purposes for a baby such as:

In a school aged child with a retained (still present) ATNR, problems can arise and the brain/body needs to work harder to fight the reflex. You see- functionally, the reflex causes one arm and leg on one side of the body to extend (and the other to flex) when there is a turn of the head. It’s also known sometimes referred to as the “fencer’s” reflex because it looks like the same pose. Here’s a picture to help you visualize. 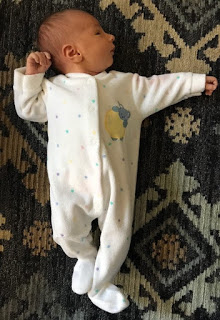 Think about this same active reflex in a school aged child though.
The child is sitting at her desk working on a writing activity that the teacher assigned. Across the room, another student starts to sharpen their pencil using the electric pencil sharpener. The child that’s writing turns their head in reaction to the sound, and guess what happens? The arm on that same side of the body wants to extend!
Remember- the ATNR is activated by a turn of the head. Head turns to one side, that same arm extends and the other flexes.
So now, that child that was writing, either (literally) has their arm extend- reflexively and without meaning to- or, if nothing else, the body has built up compensations to “fight” the reflex activity. Compensations such as tension in the neck and shoulder to keep the arm from extending. Or, maybe an awkward pencil grip that makes it easier to keep the arm from extending. Or- maybe holding the pencil itself so hard that they end up with an indent in their finger!
Stop and think about that for a second. Think about all the extra energy that her body is using just to fight that automatic movement pattern!
We at Brain Fit sometimes refer to the reflexes as being like a puppeteer. The body moves involuntarily when the appropriate activation is present. In this case, the turning of the head. There’s no conscious thought tied to the movement. It’s directed by the brain stem (AKA- the Baby Brain) and happens automatically. And that child is fighting that ATNR reflex all…day…long. Not to mention any other active reflexes that they may have!
Back to the phrase “I’m soooo tired!” Well, of course they are. Their body is expending so much needless energy fighting the action of those pesky reflexes! Fighting with little movements, big movements, compensations, brain power (or all of the above!) and their poor brains and bodies just can’t keep up.
When we work to integrate the reflexes, it’s been our experience that the tiredness lessens. The brain and body don’t need to work so hard and the energy is freed up for other things.
I know I say this a lot in this blog, but I find this work fascinating and amazing. When you look at things in a different way, you see things you just didn’t even know were there. You are able to see to the root of the problem, and that’s where the changes need to be made.
Tiredness is a real thing when you have unintegrated reflexes. Let me know if it changes once your child comes through the program.
I bet it will.

LATEST FROM MY BLOG: